Warning: Wardrobe May Contain Lion And Traces Of Snow 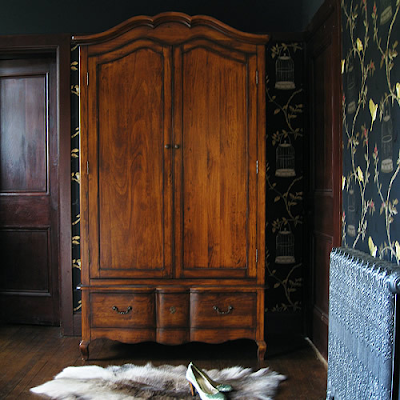 I've just read a book that reminded me of how I used to feel when I was around 11 and YEARNED with all my heart for life to be less real than it is. It was (or, at the time of writing, will be, as not in fact published till September 15th) The Night Circus by Erin Morgenstern. I won't do any of that smug "I've got a proof copy" stuff, or indeed add any spoilers, so if I say it's AS GOOD AS "JONATHAN STRANGE AND MR NORRELL" you will know what I mean, and if you don't you probably aren't a huge fan of Wardrobe literature.
Wardrobe literature, since you ask (yeah yeah), is anything that lets you believe that somewhere, if you can only find it, there is a door to somewhere amazing, or a box that contains something amazing, or a tiny odd shop that sells something amazing, etc etc, that proves beyond a shadow of a doubt that the boring old tax-paying workaday hangover road-rage noisy-neighbour Real World is just a waiting room for somewhere much better, where anything is possible. Wardrobe literature introduces the real world and then dismisses it. It doesn't bamboozle you by throwing you headfirst into Middle Earth or Earthsea, like a travel brochure for somewhere exotic you will never visit and don't speak the language anyway. Devotees of wardrobe literature get excited by antique shops and libraries. They feel a prickling of the hairs on the back of their necks when they see, you've guessed it, a large old wardrobe, or a hidden door, or dusty attic steps. They stop telling people how excited these things make them because they worry that it sounds a bit childish, but the feeling never goes. The phrase "based on a true story" makes them sigh heavily and switch off.
I have attached a very sketchy reading list below. If I have glaringly omitted anything, please let me know...

That's a great list. I love the idea of 'wardrobe-lit'.

There HAS to be some kind of antidote to those dreary self-pitying "Please Mummy Don't" books. Wardrobe-lit is, in fact, THE DIAMETRIC OPPOSITE OF THAT.

I tried to read The Dark is Rising series, I loved the first book but when I was on the second I got so truly frightened that had to stop.

There was a timeshift book - "A Stitch in Time" or maybe "A Wrinkle in Time" - can't remember exactly which.

Of course, "The Owl Service" is my all time fave - do you count that? It may not be "wardrobe" but it's certainly "attic". Any scratchy noises coming from above at night certainly have me thinking of plates and flowers.

MM - they can be re-read, you know. I have them all! And I did include Owl Service, but I added it after you got the feed. Attics definitely included!

Libby - Known in the trade as Misery Memoirs. Nobody likes them except W H Smiths. We occasionally have competitions to invent the best title, but sadly "Sold for a packet of Lambert & Butlers" actually exists, or similar...

Your title cracked me up!

And please be a "sarcastic bystander" if the fancy takes you. We need more such.

Of your 'Books for Adults' list, I have only read 'Jonathan Strange', which I loved. That scene at the beginning in York Minster where the gargoyles talk to each other had me hooked immediately.

I read most of those on your 'Children's' list when a child, and I will still read Diana Wynne Jones and Susan Cooper when the fancy takes.

How are you with 'Victorian Pastiche', which for me, has similarities to Wardrobe fiction if written well? Fingersmith, The Quincunx, The Unburied, and The Crimson and the White are all excellent examples.

Ben, you should read "The Twelfth Enchantment" by David Liss - NOT ONLY the full Wardrobe, BUT ALSO (like Strange&Norrell) pastiche Austeniana. Yes I also love the whole Victoriany thing, especially Crimson Petal. Have you read "Kept" by D J Taylor? Great (if non-magic).

Thanks Lucy! I'll add these to Giselle's reading list.

What about E Nesbit? - does a phoenix in a carpet on Kentish Town Road not count? - one of the reasons I lived in Camden for YEARS!

Unknown - Which of Giselle's lovely parents is that? Thank you! Let me know if you need recommendations for Gwynnie too!

Anonymous - Sorry sorry - of course all of E Nesbit counts, apart from the unmagical but otherwise splendid Railway Children. Wasn't one of her short stories set in Brixton? I lived there and never a psammead did I see either.

I am a huge fan of Wardrobe literature...will be calling it that from here on in. Two suggestions. Neil Gaiman's Neverwhere. It actually made the Tube feel magical. And also John Connelly's The Book of Lost Things.

Faye - Of course Neverwhere counts too! I recommend David Aaronovitch (Rivers Of London) and Mike Carey's Felix Castor books for a similar take on London...

I spent YEARS as a child (um...well into my mid-adolescence) poking around in the back of my closet (being American, we didn't have wardrobes) looking for that wonderful secret passageway thanks to C.S. Lewis.
Somewhere in young adulthood the voraciousness I had for reading disappeared (my "quiet" time was spent sleeping off the previous dusk to dawn partying or in doing artwork).
Now quite a bit older and a lot more careful about burning my candle, I am avidly embracing your reading lists. Plan to start with Jonathan Strange.

Love the term Wardrobe Literature! I've only read a few on your list so now I know I will probably love the others... thanks for the recommendations!

Just spent my entire evening shift at work reading through your blog (haven't finished yet) and came straight home to add you to my blog list, soul sistah. Come hang out in my brain any time!

Hi Marcheline! Thank you very much! I am a fickle and irregular blogger so once again this year my NY resolution is BLOG MORE.

It's my birthday! Stop by my blog and join the party! 8-)

What a great post! You had me at 'Wardrobe lit', but then to top your children's list with The Dark is Rising? Well, I'm yours forever. It's my all-time favourite book from childhood.In fact, thinking about it now, I might have to blow the dust off it and rediscover...

I've just discovered your blog and wanted to say how much I love your idea of 'wardrobe lit'! It's such a great phrase and really sums up what such books do. I've read most of those on the children's list, and am looking forward to discovering those on the adult list too. I needed some inspiration for new books, so this is perfect.

I hope you don't mind, but I've recommended your blog for an award. If you would like to take it up, please just see my blog for details.

Right, am off to catch up on all your posts that I've missed!

PS: I cannot stand the Misery Memoir books either!!