It's all terminology, innit. 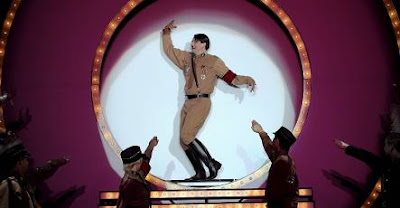 I may already have shocked and horrified thousands (or, let's be realistic, mildly amused tens) by quoting Mr Fishwife : "I don't see the point of fiction, myself." I should point out here that, in his defence, Mr Fishwife is an intelligent, articulate, well-read person. It's just that his idea of a good read tends to be the breeze-block-sized tome entitled Stalingrad, The Somme, or Hitler: The Dancing Years (... Obviously I made the last one up - far too frivolous). "Why would I want to read books about a bunch of people having nervous breakdowns in Islington?" was his initial defence; fair enough, I thought, me neither, although to consider this tiny tiny microcosm of the genre as representative of the whole of Fiction is to consider Betty Blue representative of all subtitled movies. The point of these books is not the plot development (surely everyone knows the name of Hitler's hairdresser by now?) but the nerdily desperate hope that this particular historian may have new material. No twists, no turns, no denouement.
HOWEVER.
Over the weekend, I enjoyably worked through not one but three works of fiction*. None of them, I might add, set in Islington. Every now and then I would look up at the television and it took me a while to notice that he was watching the same rugby match for the third time. "Haven't England already played Argentina?" I said. "Oh all right, all right," he replied defensively "You know how you like to reread a book for the style and the language? Same thing." My conclusion is that there is a frustrated literary stylist in all of us. In some people it only reveals itself as a love of the finer points of a rugby match.
* The Little Stranger by Sarah Waters - excellent, very creepy in a postwar Daphne du Maurier kind of way, and unusually not a Sapphic interlude in sight.
Noah's Compass by Anne Tyler - I do like her. And found myself distressingly identifying with the slightly tetchy 60-year-old male main character.
Turbulence by Giles Foden - Actually still only halfway through this one so will have to reserve judgement until I've finished. Beats Ladysmith into a cocked hat though. Up there with The Last King Of Scotland so far.
Posted by Lucy Fishwife 20 comments: