"I was a holiday vampire" confesses local bookseller 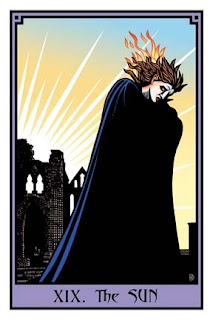 Hurrah for the hols, as the Famous Five were prone to saying with irritating regularity. I have 22 books, factor 50 sunblock and a selection of garments that more or less approximate a burkha. All I ask is a profoundly shaded seating area with an ashtray the size of a bucket and a relentless stream of waiters bearing ice-cold Chang beer. Yes, on Saturday Mr Fishwife and I will be struggling to Heathrow with our gigantic and overweight suitcases (mine = books, his = diving gear). In our separate and characteristic ways we have been preparing for this departure for weeks. I panic-buy local currency, usually at a vastly inferior rate of exchange to the one I'd have got at the Bangkok airport ATM, and fill my suitcase with books so I'm not tempted to read them before the holiday. Mr F spends every night poring over the long-range weather forecasts, establishes that there will be heavy thundershowers DIRECTLY OVER OUR HOTEL for the entire duration of the holiday, and sulks. And this is before he decides that we are heading into an area of Political Unrest and will be unable to get home due to coup-related airport closures (suits me fine). Invariably I forget my nuclear-blast-proof sunblock and have to buy it locally (you'd have thought with my leprous pallor I'd be forewarned, but this has in fact happened twice).

HOWEVER. All of the above being equal, I am looking forward to two full weeks of blissfully uninterrupted reading. Eating things with indecent amounts of chilli in/on them. Not feeling guilty about drinking cocktails midweek. Getting up early with a smile on my face because I can devote my whole day to deciding what to read and where to have a huge plate of Pad Thai for lunch. My only obligation being to vacate the room for a polite length of time while somebody else makes the bed. Wandering about barefoot or in flip-flops. WARMTH. Seeing the joy of Mr Fishwife as he slowly turns the colour of Ikea Billy shelving (beech veneer option).

Below please find the song that will be on a permanent loop in my head. I apologise for the unnecessary nature of George Michael's white Speedo. I hope you're all thoroughly jealous. I hope our hotel isn't full of people like the ones in the video...

I should just point out the fact that it says "Pat Sharp's House of Fun" in the top right-hand corner. How far back does that take you - and would you rather not have gone there...?

Equally annoying and more contrived are the ones that suggest a song - I've been singing "Revelation" (by C J Sansom) to the tune of "Isolation" by Joy Division, "Holes" (by Louis Sachar) to "Gold" by Spandau Ballet, and most annoyingly of all, "Two Caravans" (by Marina Lewycka) to "Sweet Caroline" by Neil Diamond. Don't bother telling me you love Neil Diamond, I don't care. This is torture. I've resisted having an iPod for years, partly because the length of my commute hasn't warranted it since 2001, and partly because I quite like hearing the world as I go home (how else would I be finding the karaoke pub in Hammersmith such good auditory value?). But I think I may need one, as a kind of homeopathic remedy for the earworms. Because it's either that, or become one of those strange book-industry people who lurks in the stock room singing hymns really loudly to drown out The Voices, and I'm definitely not ready for that.

Overheard on Saturday night from lovey-dovey couple holding hands over champagne glasses: "..and outside the laundrette I just puked pure water."

Apologies to anyone who got this three times on their feed - never again will I over-edit...
Posted by Lucy Fishwife 33 comments:

I'm currently having what we charitably refer to as "kaleidoscope brain" chez Fishwife - mostly down to a weekend of slow but steady alcohol intake, and the fact that due to snow, cancellations and lunches I ended up working 2 and a half days last week (result!!!). I therefore have no coherent idea for a single and on-topic post and can only offer you a small selection of things that have stuck in what passes for my mind over the last few days.

2) Overheard by my cousin in (of course) Islington: "Mummy! I've got pesto on my gilet!"

3) Hurrah for the return of the rat! Many of you may argue it has never been away and in fact is more with us than ever. I say every culture gets the vermin it deserves, and given the extraordinary stupidity of most popular culture (etc) these days, thank God at least we value brains and adaptability in our animal infestations. I know I've said this before (and will say it again, and no doubt again) but rats are highly intelligent and resourceful, they are loving and protective parents, and wash food before they eat it (where possible). Also they build separate latrine areas in their nests so food and sleeping areas are never contaminated. How unlike most celebrities.

This, you see, is the problem with the weekday lunch. Any more than a glass of wine in the middle of the day and I suddenly lose all ability to follow a train of thought, at least any one that doesn't go STARTER - WINE - MAIN COURSE - WINE - COFFEE - BRANDY - BRANDY - BRANDY - FAGS - INEVITABLE FLU FROM SMOKING OUTSIDE IN THE SNOW. Just had lunch with my friend Nicky Nicky Veronica Veronica, who is the nearest thing to me it's possible to get apart from being a few years older and a Virgo, and after half a glass of wine I had forgotten I had to go back to work. Luckily I remembered, and if my boss is reading this I'd like to say that I'm actually blogging in my tea break.
Best stop now...

Oh but PS - if there's another blog out there that manages to mention pesto and Wedekind in the same post, I'm very surprised...
Posted by Lucy Fishwife 24 comments: