Why I am very trying to watch television with.

Imagine you're watching something you particularly like on television. A cliffhangingly suspenseful thriller, perhaps. A lyrical pastoral idyll in period costume. A comedy. Here is a piece of advice I will give you: do not ever watch it with me. A few examples follow, and imagine they're being uttered during the moments where someone on screen is saying something vital to the plot:

Sense & Sensibility/Emma/Cranford : "Ooh! Loooovely wisteria! I'd love a dress that draped like that. Seriously, would you ever consider wearing a tailcoat? Those white breeches didn't do a lot for men, did they?"...

Ashes To Ashes/ Life On Mars : "THE CLASH! Yay I love this song! Pause it, pause it, I'm just going to find the CD... OK don't. What is it about Gene Hunt, honestly? I don't remotely fancy Philip actual Glenister. I think the graffiti represents death. I think he's actually Sam Tyler. Oh I love her boots. I think I had a pair of those in 1983, or maybe Kate did..."

Our Mutual Friend/Bleak House: "Ooh! Looooovely candelabra! God imagine not washing your hair for weeks. My scalp feels itchy. Why is Dickens always so foggy and greasy? Where's Jack The Ripper? Wouldn't this benefit from a bit of Jack The Ripper?"
Desperate Housewives: "That's me. I do exactly that. That's exactly me. No, she is. No, maybe her. You're a man, is she attractive? Is she too skinny? Could we get that shrubbery?"

Glee: (in floods of sentimental Disney tears) "I love this song. I love that song. Oh God, Lionel Ritchie, how lame. Oh they have to do Don't Rain On My Parade again"...

And so forth. I actually never talk through Mr Fishwife's chosen television moments (rugby, The Pacific, occasional orgies of grainy B&W tank footage on what we call the Hitler Death Channel) because what would I say? "Oooh! Loooovely scrum cap. Was their last kit pink? Did he really just shoot that Japanese POW? That's outrageous. Is that a Panzer? Did Albert Speer design those tents? Why are we in Melbourne all of a sudden?" etc. Apart, obviously, from my absolute jawdrop moment last week with the schmancy pink Stade Francais kit, I usually read. You may well imagine he gets a better deal than I do, and I would have to agree with you.
Posted by Lucy Fishwife 17 comments:

Sunday afternoon, and I'll just get past the "What I had for lunch" bit: cheddar, smoked ham, unsalted butter and wasabi on crusty fresh white bread. With a 10-litre mug of builder's tea. Now just smacking my lips and twiddling my hands mid-air with a distant expression on my face as I try to remember if there's anything cake-related in the kitchen, and, if not, whether I can be arsed to make a whole batch of chocolate brownie cupcakes just to have one now. Or maybe four. Laziness will probably win out over greed, which is a good thing as I stopped being able to describe myself as "willowy" sometime in my 20s, and recently have wondered whether "approximately humanoid" is acceptable as a description.
Mr Fishwife is watching some rugby - I speak as one who knows very little about rugby, but even I can see that this is just rugby-for-the-sake-of-watching-rugby: The teams are both dressed like Where's Wally*, although for clarity one team is in red/white stripes and the other is in red/ivory, and although I can't read very well from here (short sight, damn it) it appears to be Whifflet playing Sproin, which can hardly be major league stuff. In fact it's so minor league I am probably down on the team list as a substitute prop-forward.
I, on the other hand, am doing something useful and worthwhile - frenziedly editing the Ocado order I placed yesterday, mostly at 7 pm but partly at 1 am. HOW did those family packs of Magnum choc ices end up in there? Has somebody hacked my Ocado account? That would explain the caramel syrup, the 4 packs of Chunky Peanut Butter KitKats, the clearance Easter eggs (half price!!). It is the work of seconds to high-mindedly remove them and replace them with fresh fruit and organic courgettes. If, you know, it wasn't vitally important that I wash my hair first. Damn, too late to edit. Oh well.
I should point out that I am deeply in love with Ocado - why has it taken me this long to realise that somebody else will not only push the heavy trolley round the supermarket but also deliver it? In a van painted to look like an onion? And send you a little text message beforehand telling you to expect Vladimir In The Onion Van??? Obviously my mind was on, er, higher things.
The author would like to state that she has received no incentive, financial or otherwise, to write a favourable piece about Ocado Ltd Online Retail. More's the pity. Although they did once sub me a free bottle of Macon-Lugny because they didn't have the bread rolls I was after, which in value for money terms was quite a result. I keep ordering the bread rolls, in a triumph of hope over experience, but sadly I mostly get bread rolls. 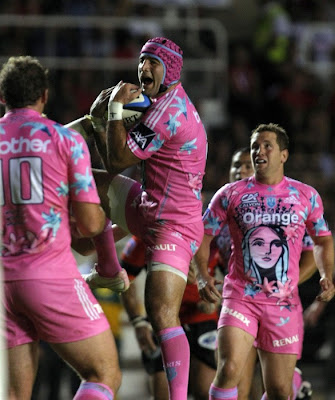 *Should just add : the rugby has now become an altogether higher-grade, Heineken Cup affair. Stade Francais are playing. They appear to be dressed as Malibu Barbie, in full head-to-toe sugar pink, with natty matching sugar-pink socks and scrum caps. The kit was obviously designed by Hello Kitty, although I probably won't be telling them that to their faces.
Posted by Lucy Fishwife 7 comments: