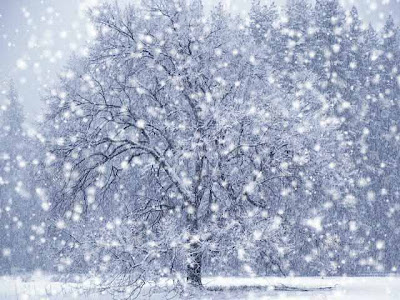 Hope we get some more of this, but only after everybody's home.
Have a wonderful Christmas, whether religious or secular.
Posted by Lucy Fishwife 7 comments:

'Tis the season to be pedantic, so who am I to fly in the face of tradition?
I have bought many packs of Christmas cards over the years, and they fall into two categories: Silly and Religious. This year is no exception, and I have some nice Nativity ones, which say "Merry Christmas" inside them, and some nice non-Nativity ones (geese, Miss Piggy and 1950s skaters, since you ask), which say "Season's greetings" or similar.
I am not particularly bothered about what Christmas cards say inside them - yes, we all know it's one of the Big Two of the Christian year, but I don't (as an agnostic myself) feel personally affronted if this is either pointed out to me or studiously (and with great PC) avoided.
After all, it's nice to think someone thought of you and sent you a card, whatever the feeling behind it.
HOWEVER. 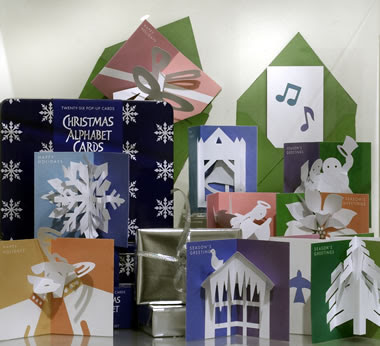 I bought some nice Robert Sabuda pop-up Christmas cards (well, I think they're nice, so that's the important thing), which combine some seriously Nativity pop-up images with some inoffensively snowman 'n' reindeer pop-up images (perfect for the rabid Zen Vegan in your life). And the one with the pop-up The Baby Jesus In A Manger says "Happy Holidays" in it.
Let's be honest, the sentiment "Happy Holidays" is designed to show Those Of Other (Or No) Faiths that while you wish them a nice break over the December 24th - January 2nd period, you wouldn't dream of trying to convert them at swordpoint like your ancestors might have done. Affixing this to a picture of The Baby Jesus is as pointless as asking people to come to church with you for a coffee. I appreciate the strenuous efforts the manufacturers were making to remain politically correct (and I am, as I may have already said, a fervent agnostic), but there are limits.
Posted by Lucy Fishwife 6 comments:

I come from a family to whom second languages are a breeze, and often third/fourth languages (if you count Swiss-German/French dialect as a language and not just a dialect). I will just say here that my pathetic contribution is French, and that's it. I once had a lengthy conversation while Interrailing, sitting outside the umpteenth cathedral I refused to go into, with a charming ancient Italian bloke in my A-level Spanish. We understood each other perfectly. It helped that the girls and I had had some wine at lunch, also that he was slightly deaf. And at the point where it turned out he was trying to set me up with his son (not present) I feigned a sudden lack of interpretation skills.
Having a facility for languages, however, is actually no help at all in the world of bookselling. Many customers, and this is not at all a criticism, don't know how to pronounce the names of foreign writers, and frankly nor do we most of the time. I know in theory that Houellebecq is pronounced Wellbeck, but prefer to pronounce it Ooouelleblablablabecque. Ditto with Chuck Palahniuk, who is now officially Plalalalalalaniacccchhh. Or maybe it's easiest to say "It's in paperback fiction under H. Just before Elizabeth Jane Howard." - all of which brings back to me the early days of Salman Rushdie's fatwah, and how suddenly it was The Done Thing on the BBC news to refer to him as SoolmAAhn RooshdEE.
Certain words are also a minefield - I mean we all know in theory how to say "genre" but tend not to, as you end up sounding like a Saatchi underling trying to sell Tracey Emin's used pants to an awestruck art novice. Especially if you add the unforgiveable word "oeuvre" which, if not considerately and inclusively pronounced "hoover", marks you out as so pretentious you need shooting. I love Nabokov (sorry), and wouldn't dream of saying "oeuvre" about his body of work.
We recently invented some incorrect pronunciations (it was a quiet afternoon) for use on the more studiedly poncey customer : my personal favourite was Alain-Benet (to be pronounced like JonBenet), although he was run a close second by Dan Brun and Jean Greeshamm.
Posted by Lucy Fishwife 10 comments: