Perfume, pubs, people-watching, all of that.

So in the pub the other night - people-watching, like one does. At the table next to us, a couple. We decided (after they'd gone, we're not animals, for God's sake) that they were either a long-married couple on the verge of meltdown ("You bastard, Adrian, I told you not to gamble away the solar panel subsidy!!!") OR on a first date where they had both been grossly misrepresented, either by mutual friends ("They said you looked like Brad Pitt!" "Well they said you looked like someone off Strictly Come Dancing, but they didn't mention it was Anne Widdecombe!") or themselves ("Fun-loving curvy blond/e... loads of personality... my mum says I'm handsome..." fill in gap).
At some point during the starter I turned to my brother-in-law, who takes us out to dinner regularly to thank us for allowing him to occasionally sleep on the cardboard placemat we like to call a spare bed (for work purposes only - he has a very nice family up North). I said "Are you covered in Vicks?". In my defence, he hadn't been feeling well. He was slightly taken aback, and said no, so I remained mildly confused. Until the angry couple left, after having spent most of the evening (while they weren't glaring at each other) texting other people. And I realised it was her perfume, namely (and I will name names) "Pomegranate Noir" by Jo Malone.
Don't get me wrong, I like it, especially on my friend Nix, but it is boldly heavy on what it claims to be opoponax (??? answers on a postcard), pepper, and patchouli. These are its claims, but I say there's a truckload of eucalyptus in there too. In large and over-optimistic first-date splash-it-all-over amounts, it smells of Vicks Vaporub. Or a koala, startled in the act of shoplifting some Vicks Vaporub and a pomegranate. And why not, if I was Jo Malone I'd use some high-flown word like "opoponax" rather than "Vicks".
At this moment I wondered whether their burgeoning relationship could have been salvaged if he hadn't got all the wrong olfactory signals, and either thought she had flu or was perhaps an aggressive man. 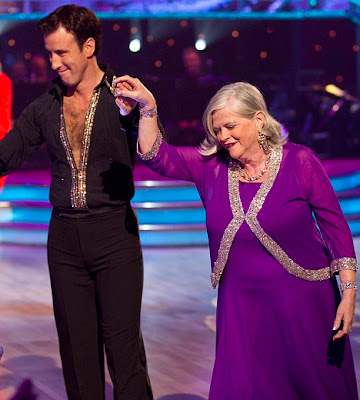 YOU KNOW YOU WANT IT. LOOK AT HER. ALL WOMAN.
Posted by Lucy Fishwife

So funny it's scary! I have a Jo Malone that really lingers - Lotus flower and baboon or something, I mentioned in on my blog (=shameless plug, god, i am good) and another blogger, janet at Gardener's Cottage explained to me how perfume makers put extenders and other chemicals in to make the perfume last, she was v knowleda g e - oh stuff it, very well informed xx

I've got the white chocolate and tequila one (or whatEVER). Fine until the cactus topnote wears off and all you smell of is Kinder Egg. Love the Orange Blossom (which just smells of orange, sod the blossom) but bought a minty jasminey one - cat pee. that is all. Just cat pee. She seems to be a bit hit and miss. The depressing thing is that I do, as I said, like Pom Noir on my friend Nix, but on me it smells like excruciatingly cheap aftershave.

Poor cow. See, if she hadn't been masking her natural pheremones she'd probably have been "in" there.

i loved the line about the solar panel subsidy, by the way, makes me feel wild and reckless just thinking about it

Might be handy to spray yourself with a bit of that perfume on those days when you want to be left alone. Or to smell like you have pneumonia, which will probably have the same effect.

Steve - I know, you men are all about the armpits, aren't you?

Blighty - Odd that that was the first example that came to mind - my parents had a solar panel idea and the last thing I could POSSIBLY imagine was my stepdad flinging it on the roulette table in a flashy Ocean's 11 style.

Fran - Far cheaper to buy Britney Spears's "Faerie Lapdancer" (or whatever her latest atrocity calls itself), I'd have thought. I have got an impressive, crunchy and offputting cough though!

Speaking as one of those dotty perfume bloggers, I am amazed at the reverence accorded to "Pom Noir", for the Vicks accord is undeniable. The persistence with which the SAs try to persuade you to layer every other blinking JM scent with Pom Noir I also find concerning...

I own four from the range, the most from a single house out of my 60+ collection (I said I was dotty): the Lotus and baboon (it can be a little sharp, granted), the Dark Amber & Ginger Lily (intriguing phantom coconut note), the Orange Blossom (bright and sunny in a Spangles kind of a way) and Vanille & Anise (the acceptable face of liquorice).

They have all started to make me sneeze, a new middle aged allergy! Have enjoyed reading you.

Flittersniffer - I also have the Orange Blossom, which is great but smells like Fanta, the Linden Blossom which is great but smells a bit like soap (shame as I love linden soap, when I can get it), the Blue Agava And Cacao (see above) and I used to have the Red Roses (the Ronseal of perfume). The "layering" concept strikes me as both lazy ("We couldn't be arsed to do this ourselves") and greedy ("Buy two or we'll call you timid and unadventurous!") - still quite like JM though.

Helen - There's one particular soap-flake note that makes me sneeze and it seems to be in everything these days. I'd like to say that's why I go for obscure stuff, but that's more a nerd thing...

Yes, I agree about layering being a greedy strategy on the part of the perfume houses, as they browbeat you into buying two bottles for twice the price of one...When it comes to the Armani Private Collection (the SA at Harvey Nicks tried to sell me Eclat de Jasmin AND Rose Alexandrie), the price of the combo is just plain silly.

Sadly, have absolutely nothing to say on the subject of perfume although, as an ex-smoker, I must confess to being rather partial to the smell of fags on a woman. rather Proustian, to be honest.

Flittersniffer - and it's still just plain lazy! It means they had the idea of doing a rose and baboon one but couldn't be arsed and want to charge you twice as much to do it yourself. Gits.

Sgt Pepper - I recommend "Jasmin Et Cigarette" by Etat Libre d'Orange - although 20 Marlboro Lights far cheaper. No, that was just a comment deleted by its own author as (probably, like me) she may have inadvertently spelled something wrong. I have done this myself in the past, and on the plus side it adds to the mystery.

I'm ultra-late to this party but I have to say THANK YOU! for the shoplifting koala visual.

Thank you. I was having a Very Crappy Evening.

A friend once gifted a bottle of something Ms. Malone for my birthday.

The scent was redolent of mint and multi-storey car park stairwells, i.e. those otherwise masquerading as urinals.

Alas, my friend and I are no longer... friends.

P.S: I have only now discovered your blog - quite why it has taken so long, this lazy cow may never explain! - and have fallen quite hopelessly in love.

I don't know how I missed this post. Your posts are so far and few between, unfortunately. I'm still laughing at smelling like a Kinder egg! xx