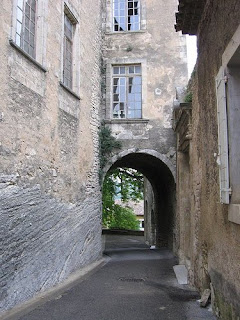 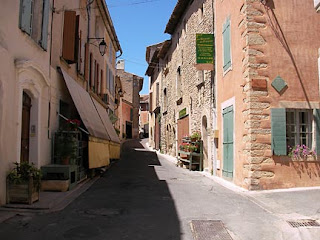 Yes, this is the staggeringly photogenic village we stayed in for a week. Stunning, old-world charm, all that Guide Verte palaver. And, much to my surprise, at no point did we stumble across a Boden photo-shoot complete with toothily beaming blondes in casual slouchy moleskin trousers and jaunty Fair-Isle tanktop playing boules with toothless old men ("Amelia: My favourite colour is : The colour of my boyfriend's wallet!").
HOWEVER there are several drawbacks to the exquisite charms of a mediaeval village that the cautious traveller should know about. Firstly, I defy you to try manoeuvring any vehicle larger than a skateboard through those picturesque arches. I spent many a happy hour leaning out of the passenger side of our hired Renault Sardine-Tin tucking the wing-mirror in and yelling "You're fine... you're fine... seriously, you've got at least two inches here...". And this is a left-hand drive hire-car, so I'm feeling strangely empowered by sitting on the side I always think of (at home) as The Seat Of Power, and getting all bossy as a result. At one point as we went the giddyingly "wrong" way round a roundabout (yes, of course it was the right way for France, it just felt wrong) I said "Mind the kerb!" once too often, prompting Mr F to say (for the first time ever) "Oh please just leave me alone" in a tone of utter exhaustion.
Another drawback was the fact that, while it did indeed boast (yes, boast) two boulangeries, a butcher and a general store, all of these were MASSIVELY overpriced, because they were well aware that any and all visitors to their bijou hamlet were going to be not only well-heeled but also unable to get anywhere else in a hurry. We cheated our way round it by heading for the gigantic LeClerc supermarket every morning to stock up on reasonably priced loo-roll etc (I swear, around £1.25 in the supermarket, somewhere around £4 for four rolls of basic in the shop. For that price I'd want it hand-hemmed in lace by Belgian nuns).
I should point out we did, in fact, have a lovely time. Apart from the two days where it rained nearly horizontally, forcing us indoors off the sunny grapevine-bedecked terrace and into the tiny sitting-room, where the only TV channels were English (which in itself tells you a lot about the main holiday lets they do), and found ourselves watching "The Hairy Bikers Do Wales" or something similar. But apart from those two days of strangely deja-vu British-style cottage holiday-ness, it was fantastic. Our main concern (apart from the extraordinary muscularity of the Euro; HOW MUCH?????) was how to get through a bottle of Calvados in a week so as not to leave any behind or to make the concierge think we were alcoholics by leaving an empty bottle (we snuck it out and hid it in a bin).
Posted by Lucy Fishwife

I need to relocate to a medieval village.

Well, while this one was a perfect example of same, it was 75% English-owned holiday homes. I'd suggest finding one less Chiswick-Sur-Rhone, although the downside of that would probably be mediaeval plumbing and heating too...

Yes, that's true--I used to live in the UK, and although a good portion of the city was accessible by vehicle, there were plenty of older streets that were walkable-only.

I suppose while people in the Middle Ages were terribly busy foretelling the end of the world, Judgement Day, etc, they never stopped to consider widening their streets for motor vehicles.. too mundane..

Lulu, what beautiful pictures! I love the Belgian nun gag. And I've been meaning to say for MONTHS: Donatella and Lips from The Muppets!!!! YES!!! You are an absolute GENIUS. Private Eye should be told...

Oh how I wish I could take credit for the photos... sadly I pinched them off TripAdvisor. The only photos I took are of Mr Fishwife asleep face down on a lounger (come to think of it, I should have posted it to that "lying down game" thingy on Facebook) which he flatly refused to let me post, and my feet with a glass of wine next to them. Tragic.

Greetings to you, Mrs F, from the Alpes-Maritimes. We have medieval villages up in the haut pays: vertiginously perched communities of alternatively glowering or gurning medieval types, all apparently nursing ancient grudges relating to unspeakable things. There is something curiously restful about being an outsider in such places ...
Hope you enjoyed your trip. Must say I've enjoyed my visit to your splendid blog, for which many thanks.

Welcome Minnie! Oh you're right - even as a visitor you get the bizarre "some things are NEVER forgotten" vibe in small towns in france (and, to be fair, small towns everywhere). But great if you're coming from somewhere like London; you can enjoy the tininess of places AND the sense of soap-opera drama seething below the surface... and then head back to the faceless mean streets. God, I'm off to write the 'Noughties version of Peyton Place now.