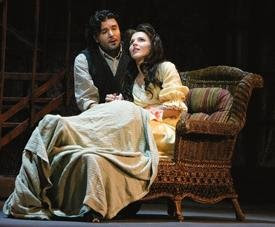 Picture the scene. An opera house stage, swagged in crimson velvet. The house lights go down, leaving only the scalloped brass footlights aglow. As the curtain slowly rises, we see before us a threadbare chaise-longue in a draughty, ill-lit Paris garret of the 19th century, upon which a frail figure in a tattered nightgown lies, coughing weakly into a tiny scrap of bloodstained lace hanky. Alone, uncared-for, the helpless figure of Mr Fishwife prepares for his final aria as a cruel world leaves him to perish of consumption. Beside him, the burly figure of, well, me, weeps in a baritone voice (I'm bordering on basso profundo at the moment).
Happy New Year! As I write I'm clutching a packet of Day Nurse capsules in one hand and a large cup of tea in the other. Oh yes, Mr Fishwife's flu has finally got its claws into me and all my attempts to dodge it have failed. Inevitable, really, when one is sharing the same bed as someone already afflicted and they are coughing lavishly into one's face at all hours of the night. So far I fear I may have infected not only Mr Fishwife's mother but also my entire family, Inexplicably Single Martyn and his parents, four of my closest friends, their nieces and nephews, and most unforgivable of all, a pregnant woman. I won't go on again about the joys of Night Nurse, but it beats champagne hands down as this year's best tipple for the festive season. On the plus side, I sneezed on somebody very rude on the Tube.
Posted by Lucy Fishwife

Hooray - welcome back ! I always found gargling with port (trick from choir) remarkably soothing..... and as for germ sharing go for it, it's the only way to build immunity, although of course working in a GPs surgery does, working on that theory, mean I should never be ill which is patently untrue. My lurg has rendered coffee undrinkable, as it tastes so vile, which, to me, seems a double whammy - yay for the New Year, or not !

Good shot! (I mean Mr Rude on the Tube). Being the Typhoid Mary of the Charing Cross Road (or wherever) is a lonely business; hope you get well soon. Night Nurse on the rocks?

This is germ warfare on the hand-to-hand scale (or face-to-face). I know a few rude people who could do with being taken down. Are you a gun for hire by any chance? If the answer is no then without any qualm I wish you a speedy recovery...

Nothing like a bit of germ warfare on the tube to alleviate one's symptoms!

TR - I will happily gargle with port if I'm allowed to swallow it afterwards! Sorry to hear about the coffee-aversion; I'm having difficulty drinking it too but mostly because I'm on so much speed(sorry, I mean pseudoephedrine decongestant) that a coffee on top of it turns me into a red-eyed jitterer...

BT - I knew a girl at college who swore by Benylin and vodka, but I haven't tried it yet. Night Nurse on the rocks would look lovely, rather like a creme de menthe frappee. I can only dream of being on Charing Cross Road! But I feel 84, if that helps.

Steve - I'm prepared to make money out of my affliction if the price is right. Dial 0800-ACHOO and ask for Splatty.

Dotterel - I have used the tactical sneeze before, on a plane, when the guy in the seat in front of me reclined it as far back as it would go and then draped his arms over the back. As his hands were 2 inches from my face at this point, I sneezed wetly all over them. He didn't do it again.

As is the way with blogging I don't know you and you don't know me but I read your blog regularly and smile .... isn't the internet a wonderful thing? Seems the cough/sneeze/cold thing is working its way around me and mine at the moment so this is a little late but Happy new year!

Hi Deirdre, and Happy New Year! I was frankly LIVID that I got the flu as I have been boasting of my iron constitution for years. Still, that proves it really is an epidemic. I love the fact that, despite the fact that none of us will probably ever meet, the internet provides a spot like chatting in the post office with people...

Your comment about The Gargoyle reminds me of the late, lamented Dorothy Parker's quote: "This is not a novel to be tossed aside lightly. It should be thrown with great force."

Night Nurse? I'm guessing that's like the American product Nyquil? There used to be a lovely product (the name of which of course I cannot recall) that I referred to as the poor man's Grand Marnier. Hmmm...I think I'll go have some Grand Marnier now. I'll toast to your speedy recovery.

It is in fact exactly like Nyquil (if Nyquil is a beautiful dark green in colour with a mentholy and slightly piney taste). More the poor man's absinthe than Grand Marnier, although if there's an orange-flavoured version, YUM. I'm still in two minds about The Gargoyle - I'm happy (indeed delighted) to suspend my disbelief, but it's being stretched to snapping point herre, and not in a good way...

I rarely get colds until I cut out alcohol and then they always strike. So I reckon you have not been drinking enough - well, Mr Fishwife has not, since he was the one who brought it into the house. It would be hard to drink enough to fight off a cold if someone is coughing in your face all night.

I am on the wagon for a month so am bound to get a cold.

Hope you are better soon. I've never tried nightnurse. Does it taste nice? Which cheese do you eat with it?

Oooh what cheese to serve with Night Nurse... perhaps something quite salty like feta or a strong Wensleydale? It's about the same sweetness as a dessert wine or Pedro Ximenez sherry. The cheese biscuits would have to be very plain as well. Mr Fishwife is a quite abstemious soul - he's a Virgo (therefore a control freak) and would rather drive than drink - I can count on (just about) the fingers of one hand the number of times I've seen him totally lashed in the last 17 years. So, obviously, a complete Typhoid Mary...

ha, I've clasped you to my sidebar now so you're bound to get better quicker.We had this winter bug in the early part of Dec and it took three bloomin' weeks to go. I hope you manage to shake it off a bit quicker than we did.

Well wishes being sent as you read this.

I quite fancy a few cubes of feta. I have indeed gone down with a bit of a cold - I knew it would happen- so will pop out for some nightnurse later. Does it have different flavours to choose from?

An abstemious other half sounds rather convenient. I always spend a fortune on taxis.

FF - thank you! It's mostly gone apart from the bunged-upness, but all positive thoughts gratefully received. Plus you've just reminded me that I may go and buy a box of Mr Kipling's French Fancies to make myself feel better.

RB - Night Nurse comes in one flavour only (sweetish menthol/pine/hmm medicinal anyway) but puts you to sleep like a baby. Take half an hour before bed, follow with a hot bath, retire to Dreamland... God, they should be paying me commission!

What a melodramatic scene.

I do hope yourself and poor Mr Fishwife (and the rest of your casualties ;-)) are rallying round now.

Hi Laura and HNY! Flu nearly gone so I'm feeling strangely peppy and sparky. Doubtless this will pass as the full grey vileness of 2009 sinks in. Hope all OK with you - I was in Oxford on Fri (at a friend's dad's funeral) and thought of you!