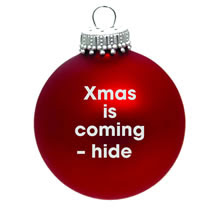 You think it's bad seeing Christmas decorations everywhere, try being the poor benighted shop-monkey who has to price them all. I speak from my dungeon of pain (actually the sunny, warm, south-facing back office) with a price gun in my hand (also a large latte and a scotch egg). It is only October the 11th, and I am half-buried in boxes of charideeee cards and slippery bundles of giftwrap.
Yes, there is a credit crunch on, a term that always makes me think of Kit-Kats (mmmm... Kit-Kats...), and I appreciate that people find it easier to start shopping for the festive season in October, thus spreading the financial load over two or three months. However, shouldn't we be crediting the great buying public with some intelligence? The Mighty Bookstore Chain I used to work for had a phase-by-phase military-style operation that would roll out in September. Phase 1 was called "Early Gifting", a phrase that actually makes me physically ill. CDs of Christmas music were played from the start of November, and by the time the doors shut on Christmas Eve, you were ready to commit homicide if you heard "Have Yourself A Merry Little Christmas" again. Seasoned booksellers could be reduced to a twitching wreck by the repeated whispering of "Pa-rum-pa-pum-pum....".
Christmas happens at the same time every year, and I defy you to prove otherwise (Leap Years don't count). People are unlikely to be taken aback on December the 23rd; although some of us are surprised by our own lack of preparation, it's not as if we didn't know it was going to happen. Everybody knows money is tight, and will be planning their spending accordingly. So why insult everybody by reminding them, in late September even, that they may need to start buying presents? Share the love! Stop the madness! I recommend a ban on all mention of Christmas until the second week in December. Starting, obviously, from 5 minutes after I publish this post.
Posted by Lucy Fishwife

I suspect you already know the website - I have these after last years enforced jollity http://www.santaballs.co.uk/index.php/pages/item_balls/i_hate_christmas/...... a colleague at work makes herself an advent calendar from the beginning of October, and is way up on my list of people in the line for a molten lead enema, no, her surname is not Gaveston.

Wasn't he drowned in a butt of Malmsey? Or am I just confusing them because of the word "butt"?
I found the website and am getting everyone baubles this year!
Just had my Perfumed Court delivery... "Sacrebleu" by Parfums de Nicolai may be my new best friend.

Mmmmm, just checked, Gaveston was killed by 2 Welshmen (what a hideous way to go)and it was his close personal friend, Edward II, who experienced "a plumber's iron, heated intensely hot, introduced through a tube into his secret private parts so that it burned the inner portions beyond the intestines", (Thank you, Sir Thomas More)
I can see Perfume Court turning into a guilty pleasure...what sweetie did you get ?

Oh YUCK. I remember it now. Thanks for an image that I will struggle to rid myself of!
Was I supposed to get a sweetie?? I got 6 spray testers in a cute little silver bag: 3 de Nicolai, 1 Chanel, 1 Guerlain, 1 CB I Hate Perfume. No sweetie. Maybe they already know I ate half a box of Ferrero Rocher last night. In my defence, they were a present.

Welcome! Wine and snacks will be served later. The sidebar lists are entirely due to the genius of Sei Shonagon - who probably wouldn't have stooped to admitting she had crushes! Ahhh Jackson Brodie. I hope Kate Atkinson realises how much joy she has brought to womankind!

First delivery came with a "might be coffee" flavoured sucky sweet and the second with a "turn your mouth inside out" lemon one. Now that was in spite of me having eaten a family bag of Minstrels (well, I am a member of a family being my defence) so they can't see everything!

Ah I think it is now later so I am here for my wine and snacks! I'll just help myself shall I?

The only good thing about Christmas is that one can drink all day without feeling at all guilty. I'm quite happy to be reminded of that.

Oh the other week, on a warm late summer September day, I saw a job ad for "elves". I couldn't work it out at first...I was a pixie - when I was seven.

The worst people are the ones that do all their Christmas shopping in the January sales of the preceeding one. Oh great. You got me a CD which is 12 months old and which I bought for myself 11 months ago... As for spreading the cost over 3 months... does that ever work? I'm sure the earlier you start the more you end up spending. Having said that I must admit to having carried a small but controlled on-line early gifting spree. At least when you shop online you don't have to listen to Simply Having A Wonderful Christmas Time...

TR - Nope, no sweets! Only got half the order though so I might get a sweet with the rest.Made too much pie for dinner party the other night so eating my way through that at the moment...

RB - During the Xmas season, when drinking all day, I try to start off with a beer, which seems to line the stomach admirably especially when taken with a few ibuprofen and a cigarette. Or, in case of emergency, a Bloody Mary, which not only makes you feel like you're getting some vitamins down you, but will now make me think of Lord of the Rings.

MM - I was a pixie too! A seconder no less. I may start looking out for elf jobs if the belt needs tightening, but to be honest with you, I'm hardly Galadriel. Maybe a job as an orc would be better...

Steve - my aunt has a frankly vile crystal carriage clock she and her friends give each other in rotation every year - I think this year her friend Nicky's due to get it, and then has to work out who to give it to next year...

I admit to buying the occasional present throughout the year, if I happen on the perfect thing. The snag is that I usually end up with half a dozen for the same person, then forget (a) that I've bought them or (b) where I've put them, so that they turn up months or years later when their relevance has faded.

I worked in a card shop at the age of 18 Lucy - your posting brings it all back. And on 1st September all the Xmas stuff came out and had to be priced (apparently this had been the date to get it out for years and years, yet our customers always moaned that our shop got earlier every year!)

And you'd be amazed how much we shifted in September - a lot of anxious old ladies wanted the cheapest cards with the best designs & that's when we put them out unless we were selling half-price AFTER Christmas. This was in the days when there was no pre-New Year sales that is.

Oh Laura the joys of retail. You can't do right for doing wrong, can you? If we put them out now we'd get the "Too early" moans, if we leave it till later we get the "Haven't you got any advent calendars YET" moans. I will admit I've already put aside a bunch of cards and gift wrap so that when I eventually have the pre-Xmas panic I won't be stuck with the crappy stuff. But you never heard me say that.

Obviously, Xmas has been grossly overrated in Western society. What about Easter? (which is much more about the message of Christianity, aka spirituality and transendence, don'\t you think?

btw, you're been tagged:
http://perfumeshrine.blogspot.com/2008/10/tag-you-are-it.html

You have my sympathies. I think I wrote my first Christmas ad back in April... no exaggeration.

Ps - I say bring back solstices. Much more fun, more bonfires, more wicker men. Thanks for the tag, am now off to unearth some less embarrassing facts about myself than I usually do!

Rol - Are you responsible for the Xmas sofa ads I saw aired two days ago?? Consider this a figurative toilet-papering of your abode...

I work in a GP surgery, we are already reminding people to request their meds in time for Christmas - resulting in a major upsurge of my own medications needless to say - Prozac profiteroles anyone ? Apropos present drawers.... oh the shame, tea lights - check, soap - check, and what about the old stand by "notelets" (I shudder at the word)? and why is it there is never anything right for the recipient in the drawer ?, you go and find two alternative presents, one of which goes in the drawer and, immediately, becomes grotesque? Or is that just me ?
Sorry if this is an exercise in convolutions ? but today warranted a hefty Ricard

I advocate starting Christmas when it actually begins - i.e. on Christmas Day (and for the twelve days following). The first two weeks of December belong to Advent.

TR - Ricards all round! It's Friday! Make mine a mauresque.

CB1 - There's been a blurring of the line between Advent and actual Christmas. I think we split the diff and celebrate both, starting with Advent, and call it all Christmas. BUT NO EARLIER...

I *hate* "Christmas Creep" - and it's already starting! I feel like holing up in my house and not coming out until January - I might do it if I had enough food and drink (strong drink at that) laid in. It's not even Halloween yet and I am already getting cranky....

Flora - I recommend dark glasses to cut the dazzle from all the tinsel. The strong drink works for me!