A quiet night in, and Mr Fishwife and I were mildly at a loss so, as you do, we went for The Previously Watched Old Faithful, Lord Of The Rings: Return Of The King. The great thing about a film you have seen a million times (well, it's big! And the special effects are amazing! And Gollum's so real!) is that you can read a book at the same time, eat a plate of roast chicken off your lap, generally fail to pay attention at all, and still enjoy it, interrupted occasionally by Mr Fishwife's nerdy cries of "Frodo? At Osgiliath? Not in my copy of the book, oh no." and "Elves?? At Helm's Deep?? I think not!!". Unless, as I did, you look up at a dramatic moment and notice, for the first time, the fact that Denethor, Steward of Gondor, while curtly sending his less-favoured son to almost certain death, is eating a plate of cherry tomatoes. 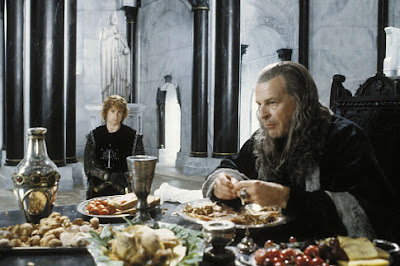 So there we have it. Photographic evidence. Now it's not the fact of the cherry tomatoes themselves, although I personally think a mouthful of rare steak would have been more apposite, and blood oozing down his chin a better (if more obvious) cinematic counterpoint to the doomed battle in which Faramir finds himself, than a mouthful of tomato juice. My point, my big thing point, is that I am now unable to watch the film without wondering where in Gondor they have the poly-tunnels necessary for the successful cultivation of cherry tomatoes in such a mountainous and rocky habitat? And given the fairly merciless appearance of the terrain, couldn't better use be made of the land than frivolously market gardening? Wouldn't potatoes be a better bet? Nobody looks that rich in Minas Tirith - are the cherry tomatoes just a perk for the Stewards? In which case Aragorn returned to take up kingship not a moment too soon.

I'm sure when the orcs storm the second tier of Minas Tirth you see a brief glimpse of Ye Olde Middle Earth Lidl... they could have got the tomatoes from there.

Of course my favourite theory is that they are normal but "dwarf" tomatoes....

I'm not so sure they're dwarf or even cherry tomatoes. Look how tiny Faramir is, compared to Denethor. Perhaps it is the latter that is unusually large, which might make the tomatoes something altogether bigger and more Gondorish, like pomengranites or rosy medlars.

The tomatoes are grown in underground caves heated by the earths core, and lit by amazing mystical powers granted to Gondor by the elves many eons before....how did you not know that ? (Nb, tongue is firmly in cheek here)
Have been admiring/marvelling at your fragrance excitements - out in the sticks options are somewhat less lavish ("Anais Anais" anyone ?), but I have just found this site, works like a dream, and I have fallen big time for the Malle "Dans tes Bras", and Parfums D'Interdit "Absolument Absinthe" http://theperfumedcourt.com/default.aspx

Steve - God I bet The Shire are LIVID about the Lidl in Minas Tirith - you could hardly be less supportive of local produce, could you? I reckon the Lidl is permanently being picketed by dwarves complaining about the name ("you say dwarf tomato, I say sizeist fascism").

BT - Sadly your theory hinges on the photo which shows Pippin, not Faramir (the lack of beard should have given it away - show me a man of Gondor with no beard, and I'll show you a girl) - but you're right, maybe Denethor just has unfeasibly large hands and is in fact eating watermelons...

T-R -You've just described some kind of fiendishly radioactive growth medium. No wonder they're all a bit strange in middle Earth!
Thanks for the link - do they deliver to the UK?

haha that gave me a bit of a Charlie and Lola moment: "those aren't cherry tomatoes those are bloodshot eyes of the bull slaughtered at dawn" or whatever.

But I am sure you can grow cherry tomatoes as creepers in all sorts of barren and hostile environments - like my back garden for instance.

I have never seen or read any Lord of the Rings (not my thing) but those names are so gloriously Welsh that I felt a huge upsurge of hiraeth.

Anyway it's definitely not too early for a glass of something nice now.

First delivery arrived 7 days after I placed order - can see this turning into an expensive habit, but such fun ......

RB - wow I haven't heard the word "hiraeth" since the last time I read Robertson Davies ("A Mixture of Frailties"). Am tucking into the Sancerre and cashews even as we speak! Join us before the mashed potatoes get cold!

T-R - Just spent £50 on them. Am eagerly awaiting my testers!!!!! Watch my sidebar for updates!

Well it was filmed in New Zealand, so there is probably a wealth of cherry toms there!

That bleeding Peter Jackson, it's obvious he took a hefty bung from the NZ Ministry of Small Fruit And Veg. Evidently the Kiwifruit Board didn't get their offer in in time for the final take.

Bless you, that was priceless! Maybe some elf flew to Italy and brought some as a gift? :P

ooh yes please. Cashews are one of my favourite foods and I have NEVER turned down a glass of Sancerre - or two - or three . . .

PS - there's probably a fantastic business to be made in the perfume world as "Scents of Middle-Earth".. The Hobbit one would be apple cider-y, the Elven one would be distinctly odd, and the Minas Tirith one would be one of theose kitchen-y "Cherry Tomato from la table de ma mere" type things...

RB- Damn, I finished the Sancerre. Pouilly-Fume do you instead?

"Paccheri are very large tubes. In fact, they are so large that they collapse when cooked, trapping inside them whatever they have been sauced with. The name means “slaps,” because they supposedly make a noise like slaps when lifted by a fork. " hooray for the internet !..... altho another site also suggests that paccheri was developed for garlic smuggling between Naples and Prussia....
I really do give too much time to random googling, bring the dancing boys with peacock feather fans to my chaise longue immediately, to feed me turkish delight and read Lampedusa to me. (Then again I could go back to my paperwork)

TR - no, seriously, garlic-smuggling???? My paccheri were delicious (big up to Giuliano's of Barnes) but none of the filling was trapped. Good job really as I made enough of a mess with flat pasta and separate sausage bits...

I just found your site via Perfume Shrine and this post totally made my day! I am a complete LOTR freak but I also amuse myself by finding botanical and other anachronisms in films, and the tomatoes were one of the first things that struck me about that scene. Mainly I am distracted by bouquets in period films - tea roses in the Middle Ages?! - but food is on my radar as well.

I will definitely be checking in on this blog regularly, it is just delightful.

Hi Flora! Thank you! My personal favourite anachronism (and I'm amazed at how widespread it is) is the "punch the air shouting YESSSSS" thing which nobody did before the 80s but now seems to have been happening as far back as the 1820s, if you believe BBC adaptations of Austen etc. Also - clapping and cheering when the main characters finally kiss (even in LOTR!) - who does that in real life?????