An odd and apparently separate part of the brain

Imagine you're a police officer, and you're attempting to establish whether there have been witnesses to a crime. We've all seen Identikit pictures of suspects on the news, and they look nothing like a real person. Often they look like a Muppet. And when the suspect is black or Asian, often the different parts of their Identikit face are slightly different colours, adding insult to injury. However - apparently there has been extensive research into how people recognise a face in a picture, and the quickest and easiest way to jog their memory is to show them a picture of somebody famous who resembles the suspect, and ask them if they saw a man who looked like, for instance, Tommy Lee Jones (a scary prospect in itself). Without going into too much scientific detail, it's mainly because our memory of a face is as a whole, and breaking it down feature by feature is far harder to do. Fascinating, no? And something I've been doing as far back as I can remember. Whenever someone tells me about a new boy/girlfriend my first question is always "Who would play them in a film?" - obviously you have to make allowances for the fact that leurve can vastly improve the looks of a potential suitor but if they say "Ooh maybe Hugh Jackman...?" I can assume it's some man who is tall, smiley, and quite good-looking (and possibly Australian). One of the best drunken dinner-party conversations I've ever had was when we were all deciding who would play us in the films that would inevitably be made of our lives - Philip Seymour Hoffman loomed large (not playing me, obviously, but as my friend Marky Mark), although my friend Steak and I nearly came to blows over who got Laura Linney. I fobbed her off with Mena Suvari (well, Steak does look about 15). Everyone tried to make Mr Fishwife feel better about his comprehensively (and prematurely) grey hair by saying "Well, obviously George Clooney". And all at once I was reminded, depressingly, of the colleague I once had (who, himself, looked like Hugh Grant in About A Boy) who considered the idea for a while and then finally decided I looked most like Axl Rose. 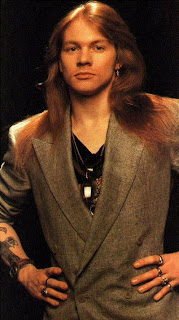 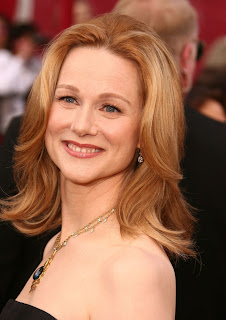 No, seriously, which one would you prefer if you were me????
Posted by Lucy Fishwife 8 comments: Links to this post

Ah, the joys of chip and pin. Or flea and code confidentiel, as the French like to call it. As if to add insult to injury at this stressful time of year, not only are the shops full to bursting (surely a good sign in a recession?), but heavy electronic traffic means that the card machines take longer to process a transaction, thus leading to so much tsk-ing from customers that it sounds like a small delegation of Kalahari tribesmen. I used to work for A Large French National Airline, some years ago, and one year the annual sales conference was entirely given over to the advent of "le ticketless" - or, as London residents know it, the Oyster Card. An enthusiastic and almost incomprehensible speech in rough franglais was given by a fervent IT nerd flown over from Charles de Gaulle airport, during the course of which it transpired that they hadn't bothered to look up what the English words for "chip and pin" and "electronic chip reader" were. Imagine a room full of French and English salespeople, half of whom can't understand what their compatriot is saying, because his English is appalling but, well, English, and half of whom can't understand what the French guy is saying because his vocabulary is deeply odd. After telling us how an ant would be installed at every checkin desk, he went on to explain that you would simply have a flea in your wallet. The flea would be updated by the sales staff, and then in order to board the plane you would pass another ant. You would show the ant your wallet (at which point all the English sales staff nudged each other and muttered "Let the ant see the wallet, mate"). Then in a frenzy of sweaty specialist excitement (his) and confused silence (ours) he sat down. We were left none the wiser except that you had something in your wallet that you showed to something else. At which point another Big Boy from Paris stood up and said, and here I transcribe as it was spoken, "Euh, many thank to my esteem collègue. His words 'ave given us many food for thought. Let us all give him the clap."
Posted by Lucy Fishwife 12 comments: Links to this post

Yes, there is such a thing. Although I'm using the word "horror" as a kind of general catch-all to include supernatural shenanigans of any kind. I've recently read a number of books whose authors breathlessly cite Stephen King as their muse, their inspiration, and their spiritual father. Sadly, not one of them had what it took. And that's not to say that they were badly written, just that they seemed to have totally missed the point about Stephen King, which is that he doesn't really write horror. I know, I know, he is the mainstay of every Horror section in every bookshop in the world, and arguably made the genre the mainstream moneyspinner it has become for so many publishers. However. Horror, to me, is what James Herbert writes - bleak, nasty, and full of rats, with everybody dead or mutilated at the end. While Stephen King has a limitlessly gruesome imagination, what he also has is a phenomenal sense of decency. You can tell that Stephen King was the fat speccy boy who was mercilessly bullied at school, and as a result has become the champion of the underdog. Almost every one of his heroes is a weak character - a battered wife, a small child, an old woman, a kid with a stammer/glasses/weight problem. And by the end of the book, natural justice has (usually) prevailed in their favour. It's the satisfying and very black-and-white morality of fairy tales. In the same bracket I'd put Muriel Grey (yes, the weeny Scottish Annie Lennox-clone from The Tube), John Connolly and the truly wonderful Phil Rickman. I was having huge difficulties getting off to sleep last night (Sunday night syndrome) and realised that it was because I had three chapters left of To Dream Of The Dead by Phil Rickman - and I had to put the light on and finish it, reassuring myself that embattled female vicar (and Deliverance minister) Merrily Watkins and her grumpy New Age daughter Jane would be OK. Of course they were, because Phil Rickman is (and I say this with the utmost respect for both of them) another Stephen King. Albeit an uncompromisingly British one. 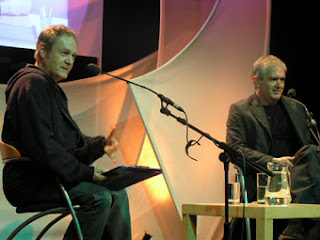 The lovely Phil Rickman (on left). In his day job as BBC Radio Wales' "Phil The Shelf". Won't bother with a picture of Stephen King because you all know what he looks like.
Posted by Lucy Fishwife 13 comments: Links to this post